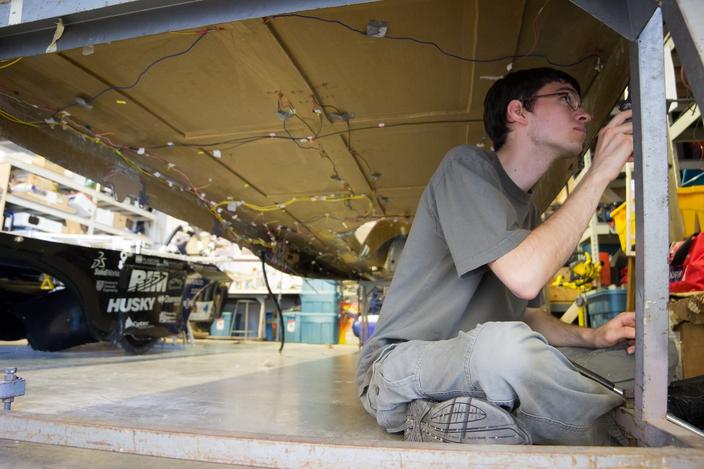 The University of Waterloo Midnight Sun Solar Rayce Car Team has taken its 10th solar car, the Midnight Sun X, to the 2013 Formula Sun Grand Prix competition in Austin, Texas from June 24 to June 29. As the only Canadian team going to the race, the UW team has been preparing thoroughly and the Midnight Sun X demonstrates new bounds into the search for sustainable cars.

Named after the natural phenomenon which occurs in the Arctic and Antarctic Circles where the sun remains in the sky for 24 hours, the Midnight Sun X is a lighter-weight model with improvements to the steering and electrical system.

The original Midnight Sun X placed 30th at the 2011 Veolia World Solar Challenge in Australia completing a total of 1116 km in solar distance. The team is excited to be competing again with new changes to their already successful design. The project has even attracted the interest of the Discovery Channel which will be recording the team’s participation at the Formula Sun Grand Prix with plans to be involved in documenting the creation of the Midnight Sun XI.

Starting from scratch, the Midnight Sun X cost an estimated $250,000. In order to compete in a race such as the Formula Sun Grand Prix the club needs an additional $100,000. To help reduce costs the UW Midnight Sun Solar Rayce Car Team often reuses parts from older models; the rest is covered through fundraising.

“Our team runs a very shoe-string budget compared to other solar car teams that are out there. We’re talking about teams that have million dollar budgets. As a student run team, we don’t really have access to that amount of resources,” said Nate Wennyk, the team’s project manager.

The car absorbs light energy, or photons, through a solar array — a panel of solar cells which converts photons into electricity to power the car. The array is made up of 403 cells which are placed in a series and configured into different arrangements called modules. These modules are then spread out over the contours of the car and connected into a total of five parallel strings. The converted electrical power is then stored in a 20 mg polymer battery pack which is capable of providing 3.7 kilowatt hours of power and allowing the car to drive up to six hours with no sun.

The drive system of the car is made up of an in-hub motor fitting right to the tires enabling the bearings to be very sleek and streamlined. The driver talks digitally to the motor controller similar to a drive-by-wire system — an electromechanical control system — but the car is still equipped with a mechanical steering wheel and physical brakes which are only meant for emergency use. Instead, the Midnight Sun X uses regenerative braking, which can turn the engine into a generator in order to recover energy while stopping.

Wennyk gave some insight into the changes made to the Midnight Sun X design, and what they mean for this race and the future of the project.

“There were a few major regulation changes, one of them was the seating angle,” Wennyk said. “For Midnight Sun IX they didn’t really redesign for that seating change. They just made the driver sit up by the front which made a very top-heavy car. What we’ve done is we’ve put the driver at the back. Basically the rear tire is at their back so they’re close to the ground and that keeps the centre of gravity very low.”

The aero body and the aluminum space frame also help reduce the weight of the car. The resulting weight reduction and change in seating position allow the Midnight Sun X to handle much better than its predecessors and make it more efficient for driving on the road.

This electrical system is actually the design for the upcoming Midnight Sun XI, but has been installed in the Midnight Sun X for race testing at the Formula Sun Grand Prix. The driver controls have new control loops giving the driver more freedom. The accelerator and the brake are no longer as delicate and the feel is more closely related to your average road car.

The Formula Sun Grand Prix is being held at the Circuit of the Americas in Austin, the only North American F1 series racetrack. The Midnight Sun Rayce Car Team specializes in cars built for driving on straight roads, so the circular track provides an extra challenge. To adapt to this change, the Midnight Sun X has been equipped with a new simplified driver interface to reduce driver fatigue.

“The actual interface to the rest of the car is BiFun. It’s a huge improvement compared to the pat-your-head, rub-your-stomach system to turn on the car in the past,” Wennyk said.

Sponsorship & giving back to the community

The Midnight Sun Solar Rayce Car Team doesn’t just build cars though. Sponsorship and educational outreach programs for the community are also part of their central work. Their appearances range from local events such as Cruising on the Town Square to seminars on sustainable energy at elementary schools.

“Our car is 100 per cent sponsored, meaning that when we build this car, as well as putting our time and effort into [it] that ultimately it’s our sponsors’ vehicle. Without their support we wouldn’t be able to do what we do,” said Wennyk.

The solar array is one of the biggest expenditures necessary to build the car, and the price ranges from $30,000 to $40,000.

“The solar cells are what allow you to be competitive, and there are only a few companies you can go to that sell cells in a style that’s usable for a solar car team,” Wennyk said. “You really have to come up with the monetary value beforehand. So what we have is an Adopt-a-Cell program. Basically what it allows us to do is just the Average Joe can give us a sponsorship of $20 to $100 depending on how much they want to adopt. And they actually will adopt a cell for our car. It would not be there without them.”

The search for a sustainable solution

The team has high hopes for Austin, but the primary goal of the project is to create a real solution for sustainable transportation.

“Even though we’re competing with other schools, and you always want to come first, that’s not the actual goal,” said Wennyk. “At the end of the day you want all the solar cars to start at the same time and finish at the same time because then what you’ve done is demonstrated that it is possible, that this is a feasible way to power human transport.”

Plans for the Midnight Sun XI are already in place. The next version of the car is to look more like a regular vehicle, moving from the Midnight Sun X (which is a single-seater three- wheel car) to a two-seater, four-wheel design.

“It’s going to look a lot like what you would see from day-to-day cars,” said Wennyk. “And if someone walks up to it they don’t go, ‘Aw man, that’s kind of cool but I’ll never take it for grocery shopping.’”

These major changes mean the Midnight Sun XI is going to be built from the ground up. The aluminum frame is to be replaced by a composite frame, using a monocoque or semi-monocoque structural approach. This method means the load of the car will be supported through its skin, similar to a ping pong ball.

The Adopt-a-Cell program has already begun for the Midnight Sun XI. There are 2,000 cells up for adoption and students can sponsor at http://www.uwmidsun.com/adopt-a-cell.

This article originally appeared in the Imprint on June 28, 2013.